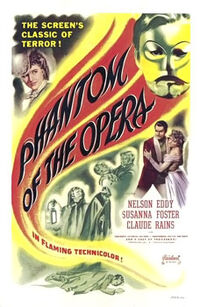 Phantom of the Opera is a 1943 Universal horror film starring Nelson Eddy, Susanna Foster and Claude Rains, directed by Arthur Lubin. The original music score was composed by Edward Ward. It was the first Phantom to be shot in Technicolor.

It was filmed on the same Universal soundstage as the studio's 1925 version of the story, in which a replica of the Opéra Garnier interior had been built (and exists to this day). Other than the sets, this "remake" had little in common with the earlier film. There was no attempt to film the masked ball sequence, although the famous falling of the chandelier was re-enacted on an epic scale, using elaborate camera set-ups. The cinematographers were Hal Mohr and W. Howard Greene.

Erique Claudin (Claude Rains) had been a violinist at the Paris Opera House for twenty years. However he has been losing the use of the fingers of his left hand, which affects his violin-playing. He is dismissed because of this, the conductor of the opera house assuming that he has enough money to support himself. This is not the case however, for Claudin has spent it all by anonymously funding the music lessons of Christine Dubois (Susanna Foster), a young soprano whom Claudin has secretly fallen in love with. In a desperate attempt to gain money, Claudin tries to get a concerto he has written published. After submitting it and not hearing a response, he becomes worried and returns to the publishers, Maurice Pleyel & Georgette Desjardins, to ask about it. No one there knows what happened to it, and do not seem to care. Claudin persists, but Pleyel rudely tells him to leave and goes back to the etchings he was working on.

Finally giving up, Claudin stands there for a moment and hangs his head sadly. Someone begins to play music in the next room, and he looks up in shock when he hears it. It is his concerto that is merely being endorsed and praised by Franz Liszt. Convinced that Pleyel is trying to steal his concerto, Claudin leaps up and begins to strangle him. Just as he tosses the body of Pleyel to the floor, Georgette, the publisher's assistant, throws etching acid at Claudin. Screeching and wailing, he dashes out the door clutching his face. Now being hunted down by the police for murder, he flees to the sewers of the Opera. Claudin steals a prop mask from the costume department to cover his now-disfigured face and becomes obsessed with Christine.

Meanwhile, Inspector Raoul Dubert (Edgar Barrier) wants Christine to quit the Opera and marry him. But famed opera baritone Anatole Garron (Nelson Eddy) hopes to win Christine's heart. Christine considers them both good friends but doesn't openly express if she loves them. Christine is the understudy for the Opera’s female diva Mme. Biancarolli (Jane Farrar), who will do anything to stay in the limelight. But during a performance of the opera Amore et Gloire, Claudin drugs a glass of wine which Biancarolli drinks and makes her collapse and unable to perform. The director puts Christine in her place and she dazzles both the audience and everyone else. But Mme. Biancarolli who suspects that Garron and Christine are guilty. She orders Raoul to arrest them but he says he can't because there is no evidence to prove that her statement true. So Biancarolli sets a condition. She will forget the whole affair only if Christine's performance is not mentioned in the papers. And that it will be forgotten about completely by everyone. Her conditions are reluctantly accepted, much to Christine and Anatole's dismay. The next night Claudin enters Biancarolli's dressing room and kills her and her maid.

After some time. To catch Claudin, Raoul comes up with a plan: not let Christine sing during a performance of the opera "La Prince Masque du Caucasus" while Garron plans to have Liszt play the concerto after the performance. But Claudin strangles one of Dubert's men and heads to the domed ceiling of the auditorium. He then brings down the large chandelier on the audience and cause chaos to spread. As the audience and the crew flee, Claudin takes Christine down underground. He tells Christine that he loves her and that she will now sing all she wants, but only for him. And that they will remain together. But Christine doesn't recognize Claudin and is afraid of him.

Raoul, Anatole and the police begin pursuing them underground. Just as Claudin and Christine arrive in his lair they hear Liszt and the whole orchestra playing Claudin's concerto. Claudin plays along with it on his Piano as Christine watches. Raoul and Anatole hear Claudin playing and follow the sound. Overjoyed, Claudin urges Christine to sing which she does. While Claudin is distracted by the music Christine sneaks up and pulls off his mask and sees his burnt disfigured face caused by the acid. At that same moment Raoul and Anatole break in. Claudin grabs a sword to fight them with. Raoul fires his gun at Claudin, but Anatole knocks Raoul's arm and the shot hits the ceiling causing a cave in. Anatole and Raoul escape with Christine but Claudin gets crushed to death by the falling rocks. Anatole then tells Christine that she and Claudin had come from the same town district which she responds with by saying while Claudin had seemed a bit like a stranger to her she had somehow "always felt drawn to him". Anatole finishes by saying that Claudin's suffering will be forgotten and his concerto will live on. Back at the Phantom's lair, in memory, one of the final scenes shows The mask propped against Claudin's violin.

Later, Anatole and Raoul demand that Christine finally chooses between the two men. She surprises Anatole and Raoul by choosing to marry neither and pursue her singing career. Because now understands how much Claudin loved her and how much he was devoted to her singing. She leaves the room and joins her adoring fans outside. The film ends with Anatole and Raoul go off to commiserate together.

Universal first announced a remake of The Phantom of the Opera in 1935. This version would have been set in contemporary Paris, and would have portrayed the Phantom as a psychologically wounded World War I veteran who was physically unharmed, but imagined that he was disfigured. The screenplay lingered in development until 1941, when Henry Koster was brought on board to direct. Koster discarded the previous screenplay, and envisioned a new version of the story in which the Phantom was Christine's father. Producer George Waggner ultimately fired Koster from the project and replaced him with Arthur Lubin.

This version of the old story places more emphasis on opera than Phantom; the music was adapted from Tschaikovsky and other Russian composers. There is no official "opera" performed; Russian lyrics were added to pieces of symphonies, piano concerti, etc. during the climactic chandelier scene. This was probably an economic decision, as most of the music used would be in the public domain, hence no royalties to pay. Nelson Eddy is a bit over his head in this role; his baritone voice was great, but not operatic. Susannah Foster, on the other hand, fills her musical role very well. Another note - evidently director Lubin watched Lon Chaney's 1925 masterpiece and decided to make the chandelier scene more dramatic. Chaney's Phantom is seen in shadow, untying the rope slowly that holds the chandelier accompanied by a title slide that quotes the novel: "She is singing to-night to bring the chandelier down!". The scene is not played to its full dramatic potential. Lubin intercut between singers on the stage and the Phantom's sawing away on the support chain with a hacksaw. He builds tension; he highlights the dramatic crescendo in the music as it builds to a climax, with the chandelier falling as the soprano puts her hand to her mouth and screams...great melodrama. Not a faithful rendition of the novel (the first film tries the hardest of all to stick to Gaston Leroux's 1911 novel, which would be a difficult undertaking given the scope of the back story), it is the first version to utilize sound (and some great singing) to its full potential. It's not perfect, but it was a wonderful distraction for folks tired of war in 1943.

Cesar Romero, Boris Karloff, Feodor Chaliapin, Charles Laughton and Broderick Crawford were all considered for the role of the Phantom at various points during production, before the role was given to Rains.[4] Koster's subplot about the Phantom being Christine's father was jettisoned because it gave the romantic elements of their relationship incestuous overtones.[5] During the same year that the film was released, Phantom of the Opera was adapted into an audio presentation for the Lux Radio Theater. Nelson Eddy, Susanna Foster and Edgar Barrier reprised their roles, but instead of Claude Rains, Basil Rathbone played Erique Claudin. This presentation was produced and hosted by Cecil B. DeMille.

Edward Ward wrote the score. The film has many elements of a musical, with lengthy opera sequences, and has been criticized for being more musical than horrific. For the opera sequences, Ward adapted music from Tchaikovsky's Symphony No. 4 as well as using themes by Chopin. He also composed an original theme, Lullaby of the Bells, which was heard in the film as the Phantom's piano concerto.

Contemporary reviews were mixed. Bosley Crowther of The New York Times panned the film for being "watered down" from the original, calling the opening sequence "the only one in the film in which the potential excitement of the story is realized," while otherwise the "richness of décor and music is precisely what gets in the way of the tale." Variety called it "a vivid, elaborate, and, within its original story limitations, an effective production geared for substantial grosses." Harrison's Reports called it "a good entertainment, the sort that will direct an appeal to all types of audiences." David Lardner's review in The New Yorker dismissed the film, calling it "by no means a sample of the march of progress in the film world. The old version had Lon Chaney, who scared you plenty, and the new one has Claude Rains, who somehow doesn't."

Rotten Tomatoes gave this version of Phantom of the Opera an average score of 75%, based on 20 reviews from critics

Following the success of Phantom of the Opera, Universal announced that a sequel would be made, titled The Climax. Nelson Eddy and Susanna Foster were to return, along with Claude Rains as the Phantom, most likely meaning that his character did indeed survive the cave in at the finale of the first film; indeed, in the final shot of the mask and violin atop the rubble, there is a sound of moving rock. The sequel, however, was later cancelled due to story troubles and problems concerning the availability of Claude Rains. "The Climax"was indeed released the year after Phantom of the Opera, but it was not a continuation of the previous film and featured completely new characters.

The film was nominated for four Academy Awards, winning in two categories:

Community content is available under CC-BY-SA unless otherwise noted.
Advertisement